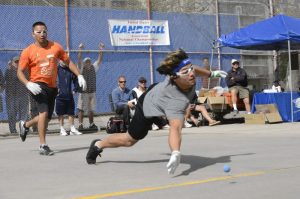 BROOKLYN, N.Y. —  Most players weren’t around for the 1st One-Wall Nationals, held at the Brownsville Boys Club in Brooklyn in September of 1959. That year, two future Hall of Famers met in the final where Oscar Obert defeated Vic Herskowitz in front of a raucous crowd in the club gymnasium.  Since then the Nationals have moved outside, needing more courts to accommodate multiple divisions.

Now held in Coney Island on the corner of West 5th and Surf Avenue, the tradition continues where winners of their respective divisions will have their names etched on the Wall of Champions in the Handball Hall of Fame.

We’re proud to present the 59th USHA One-Wall National Championships in Coney Island, August 1-4.  The entry deadline has been extended, and players may now enter by Sunday, July 28 at 3 p.m. (Eastern).

Players can enter online at the tournament’s R2sports site HERE, printing out and mailing the entry form HERE, or by calling 520-795-0434 to enter by phone (extra fee).