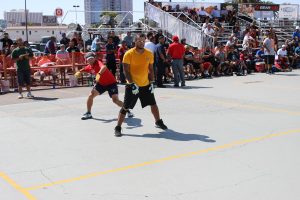 “We are committed to promoting and supporting 1-Wall small ball handball,” stated Jared Vale, president of ValeU Group and one of 1-Wall’s greatest contributors. “Our aim is to revitalize this form of the game; for more people to play it and watch it!  We were excited to team with the WPH and 3WB to hold this prestigious 1-Wall small ball division this September at the 3WB Outdoor World Championships.” 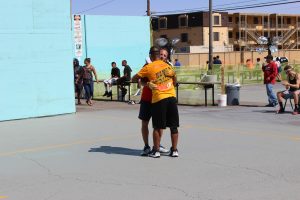 Timbo Gonzalez ended David Fink’s quest for the 2019 ValeU Group slam in the upper bracket semifinals, as the current 1-Wall small ball and big ball national singles champion raced to a 13-0 lead, only to find himself receiving serve at 20-22 after a Fink hot streak. Timbo played solid defense in the late stages of the match, eventually advancing, 25-21.

Joe Kaplan trailed Tywan Cook throughout the first half of their bottom bracket semifinal, eventually catching Cook at 16 and playing virtually even the rest way of the way. Kaplan relied on his serve and fly kill to meet Timbo in the final, defeating Cook 25-23. 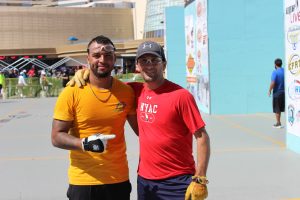 Timbo was ruthless against his New York rival, keeping Kaplan behind him and controlling the center of the court. Timbo built a 17-2 lead in the one game match to 21, but developed a severe cramp in his calf that left the outcome in doubt. Following three consecutive timeouts, Timbo was immobile, unable to move forward and barely able to move more than one step. With the door ajar, Kaplan was unable to take advantage, hitting the ball to Timbo or making errors. “I just didn’t have anything today,” lamented Kaplan. Timbo was able to close out the match with a lob serve and effective (legal) blocking, taking his third title of the day. Final” Timbo def Kaplan 21-7 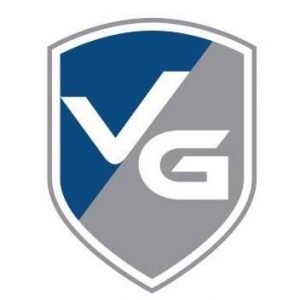 Thank you to Jared Vale and the ValeU Group for their generous sponsorship of the 1-Wall small ball singles!