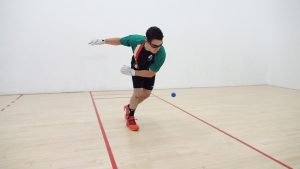 Arvada, CO, WPH Press, 3/8/20- The Colorado Handball Association proudly presented the 2020 CO State Singles at the Apex Racquetball and Fitness Center in Arvada, CO, featuring 77 players from the Rocky Mountain region and beyond. 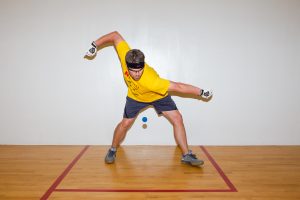 Hammond’s title reign ended at the hands of eighth-seeded Wyoming star TJ Stender, who defeated Drft Fernandez in the round of 16. Stender dropped game one against the defending champ, evened the match with a decisive second-game win, and survived a tight tiebreaker to advance to the final in the upper bracket. Colorado’s Luis Perez ended Stender’s run in the semis, dropping the pride of the Cowboy State in two games to advance to the final. 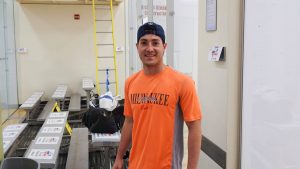 R48 #10 Leo Canales, Jr. was dominant in the bottom bracket, surrendering 11 points or less in his six games in his three bottom bracket matches, including a decisive two-game sweep against 40+ star Kevin Price in the semifinals. “Kevin played his defensive game but it seemed like he got tired pretty quick,” stated Canales, Jr.

The battle of young guns produced sensational rallies and shot making in the final, as the future of the sport was on display between the two early-20’s stars. Canales, Jr. controlled the action in game one, planting himself in the front court and dictating play. Perez stormed back in game two, barely edging the R48 top 10 pro to force a decider. The tiebreaker was all Canales, Jr., as the El Paso Sensation (EPS) never allowed Perez onto the scoreboard. “The final was really good,” stated Canales, Jr. “Luis played really well in the second game, I got a little tired, but I regrouped in the tiebreaker.”