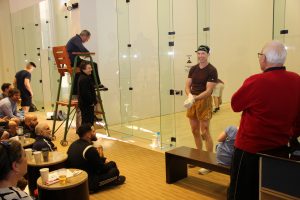 We had a great turnout for the 2020 State 4 Wall Singles. We had players travel in from Columbus, OH, Grand Rapids, East Lansing and even 1 from California.  The results are below:

The Open Division started with one big bracket of 16 players all playing 2 matches per day (games to 15 – win by 2) and competing for places 1st to 16th.  This is similar format the WPH follows and it worked very well for a 2-day tournament.

In the first two rounds, most of the matches went according to seedings.  In one interesting match up of youth vs experience, Steve Dykes (Columbus, OH), defeated Joe Green in 3 games.  Joe took game one and it looked like the quickness and solid play Joe in his 20s was going to be too much for Steve who plays in the 60s division in national tournaments.  However, Steve figured out the new courts and his opponent to get the win – keeping him off balance with fist passes and kills.

Steve ran into another veteran in Pete Dembeck in round 2.  Pete would play in the 55s if we could ever get him to go to a national tournament.  Dembeck won in two games setting up a great semi-final with Steve Dobrash. 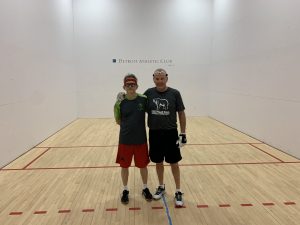 The Dobrash Dembeck semi-final went 3 games.  Dobrash, who grew up in Michigan and played college handball at Memphis State, recently returned to the game of handball.  His new home in San Francisco is blocks from the Olympic Club that has a very active handball program.  Steve was able to arrange his schedule to play in our tournament and we thank him for that.

Game 1 of the semi-final went to Dobrash who displayed his strong fundamental and methodical game taking the right shot at the right time.  In game 2, Dembeck found some serves that were able to allow him to stay on the offense and pull out game 2.  In the tie breaker it was a game of runs.  With both players at around 10 or 11 pts, Dobrash found the winning run to close it out with some great back wall kills and steady play.

On the other side of the bracket Rick Leonard faced the State 3 Wall champion – Ryan Inman.  Ryan was too much as his great speed and kill game combined with improved patience made it a quick 2 game win.

The final was a pleasure to watch as it went 3 games.  Inman jumped on Dobrash in the first game as he stayed in rhythm killing the ball whenever the chance permitted.  In game two, Steve was able to slow things down and keep Ryan off balance with lob serves and patiently finding the necessary pass or kill to score.

In the tie breaker Inman jumped out to an early lead finding his game one form.  Dobrash battled back but Inman made incredible gets on passes and kills to secure the title with a 15-11 win.

Steve Dobrash will be a force at the national level in the 45s bracket where his kills and great passes won’t be chased down by young fast legs.  You don’t get to the top of state level at handball without a ton of hard work and Ryan Inman has done that.  Congratulations to Ryan Inman who played the best match of his career against a great opponent.

In the 5th place match, Billy Wetzel defeated Ben Hall.  Ben, who won the state 3 wall doubles this past summer, continues to get better and battled hard.  But youth prevailed again.  Billy is a student attending MSU who has been playing with his Dad in Illinois.  He is now playing at the MAC in Lansing.  With his long wingspan and competitive nature, he is going to contending for State Open titles very soon.

In came down to a battle of brothers for 9th place.  Ramzy and Rick Kader made the trip in from Grand Rapids along with their cousin Samer Hamed.  In the early rounds, Billy Sidebottom Jr. beat Samer to face Ramzy Kader.  Using the WPH format of one game to 25 with a halftime, Ramzy beat Billy 25-21.

Joe Green faced Rick Kader on the other side and Rick won 25-11.  Joe beat Greg Scanlon from East Lansing in the earlier round – another up and coming player playing at the MAC.

In the battle of brothers Ramzy prevailed 25-19.

Mike Fagan and Steve Dykes dropped into the 50s bracket after losing in the round of 8 in the open.  Steve beat Chuck Ferro in the semis.  Mike Fagan beat Craig Sickmiller in a tie breaker.  Craig had beat Bob Balch in a tie breaker in round 1.  It was great to see Craig playing again and playing well.  Craig missed over a year caring for his wife who recently passed.

In the finals Dykes beat Fagan in two very close games – 13, 12.  Congratulations to Steve and thanks for making the trip up from Columbus.

We had some great battles in the 65s division with 8 players.  Ray Mayo and Rich Goosmann made the trip up from Columbus, OH.   Ray beat Kenny Luchkovitz in round one (18,3).  Rich beat Mike Howe in two games.

Thanks for Bob Balch for taking pictures of the event.  These pictures and write up will be added to the website under tournament results.