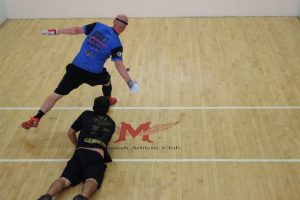 The 2019 R48LTE Portland Classic wrapped up on Sunday with a blockbuster final between R48 #3 Sean Lenning and R48 #4 Lucho Cordova. Lenning started slowly in the event, dropping game one in his quarterfinal match before winning both his quarterfinal and semifinal matches in tiebreakers, while Lucho did his best impression of Catriona Casey, dismantling his three foes en route to the final by a combined score of 90-15.

(EDITOR’S NOTE:  If you are a Patreon Member of the WPH, we have a video wrap up by Dave Fink, HERE.  If you are NOT a WPH Patreon yet, sign up with Patreon at patreon.com.  Then, go to the WPH Patreon Page and make a Pledge.  The WPH ONLY POSTS Exclusive Handball content, here:  patreon.com/wphlive; to include the semis and finals from Portland, plus player interviews and a video wrap up by Dave Fink.  Enjoy!)

Lucho carried his dominating form into Sunday’s final, seizing a 7-0 lead in game one against Lenning. Lenning quickly answered, taking the lead in his next inning with a barrage of aces and kills. Lucho reclaimed the lead at 12-10, but Lenning mounted another charge, scoring five of the final six points of the game to take a one game lead.

To watch this match, head over to Patreon.com Now! Luis Cordova vs Sean Lenning 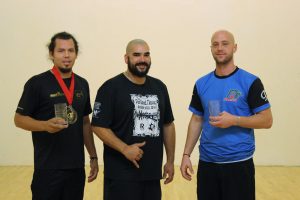 Lucho took control of the match after dropping game one, putting his foot on the gas and pushing Lenning to exhaustion. Lenning could offer little resistance in the second and third games, scoring just five combined points, as Lucho grabbed his second R48LTE title and third overall R48 title. Lucho’s combination of speed, power, offense, and defense has made him the most dangerous player in the game.

“I just feel like every part of my game has improved a little bit over the years,” stated Lucho. “My serve is better now and my left is definitely better and I feel strong.” 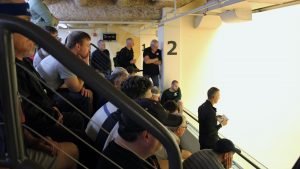 After making the final in the first event of the season at the e4 Ron Cook Atlanta and winning the R48LTE Portland Classic, Lucho is, alongside his brother Danos, the player to beat on the tour.

Lucho will aim for this third consecutive R48 IX final and fourth R48 title at the Tucson Memorial in less than two weeks. Lucho will be joined by the rest of the R48 Men’s Pro Elite 8 in what promises to be a sensational event. 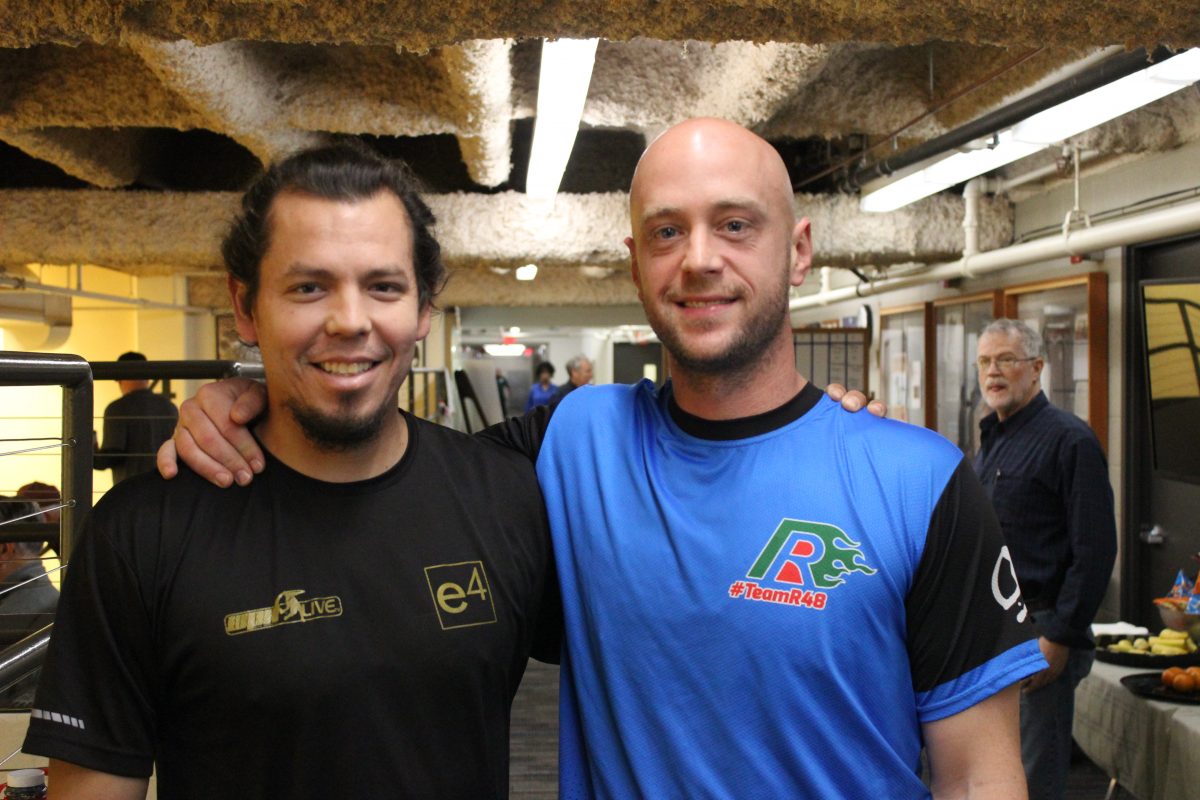 1st: L. Cordova (On Patreon, this men’s final has been uploaded.  Head there now to view!)

3rd: Fink/Perez (On Patreon, we have uploaded the Men’s semis!  Vic Perez vs Sean Lenning and Luis Cordova vs David Fink)

Watch the Video wrap up from Portland, by Dave Fink and Che Lowenstein, HERE

The R48LTE Portland Classic field was trimmed to two players after Saturday’s quarterfinals and semifinals, as four of the top six players on the R48 tour and several R48 veterans and rising stars battled at the Multnomah Athletic Club. 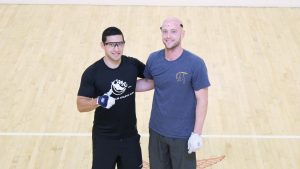 Top-seeded Sean Lenning started slowly against the best player to never qualify on the R48, dropping game one against the LAAC’s Dylan Hernandez. Lenning bounced back in games two and three, taking control of the front court and keeping DH off-balance.

Vic Perez faced stylish shot maker Niall O’Connor for the first time for a chance to face Lenning in the upper bracket semifinals. After being tied at 11 in game one, Perez took control, scoring 19 of the final 22 points of the match. “I started to play well and put the ball down after we were tied at 11,” stated Perez. 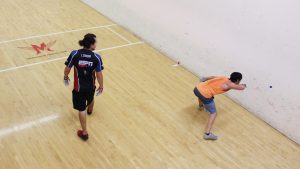 David Fink faced local favorite and former Elite 8 member Aaron Garner in the bottom bracket. The pair had played tiebreakers in four of their five encounters and today would be no different. Fink and Garner split lopsided games and stood tied at seven in the tiebreaker. Fink found a hot serve and benefited from five late third game errors to advance. “I just got tired in there but I’m having fun playing,” stated Garner, who finished his Master’s degree in social work four months ago and had not touched a handball in six months.

Lucho Cordova dominated eight-time defending champion Dalton Beall to meet Fink in the bottom bracket semifinals, allowing just one point (!) in two games. “I feel like I didn’t even get a workout in there, he just put everything down,” stated Beall. Cordova outscored his round of 16 and quarterfinal opponents by a combined 60-6. *Spoiler* Lucho’s semifinal opponent would not fare much better. 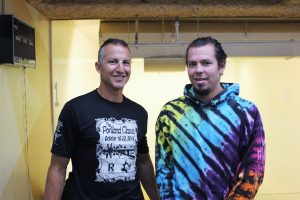 Lucho Cordova and Fink met in a rematch of their two-hour quarterfinal thriller from Atlanta two weeks ago. This match lacked the drama and length, as Cordova routed the veteran in two games in less than 30 minutes. “Everything was just falling for me today,” stated Cordova in the understatement of the year.

“I’d have to pay for a lesson like that if this wasn’t a tournament,” stated Fink. “Lucho is just a lot better than me. A lot better.”

Lenning and Perez dazzled the awestruck Portland galleries in the second semifinal of the night, playing handball at the highest level. Lenning played like only Lenning can play in game one, striking off-balance flick fly kills and deep court kills to take a one-game lead in just eight minutes. Perez returned the favor in game two, finding his range in the left corner and running away with game two.

Game three produced the best handball of the season, as both R48 stars played sublime defense and outrageous offense to earn points and side outs. Perez led 12-10 but a side out gave Lenning the serve. Lenning quickly tied the score at 12, but a double fault handed Perez the serve. Perez passed on three chances to kill to score the 13th point, ultimately giving Lenning an opportunity to end the rally. Perez never scored again, as Lenning crushed two aces and one kill to win the best match of the tournament. “That was just phenomenal handball,” stated a mesmerized Hernandez.

Cordova def Fink 15-4, 15-5 (To watch this match, please join WPH Patreon and then CLICK THIS LINK) 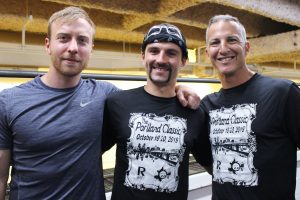 The 5th place playoffs provided plenty of excitement, as only the top six would earn ranking points.

After taking an 8-0 lead in the one-game match to 25, Niall O’Connor trailed Dylan Hernandez 17-22. Hernandez needed just three points to earn a R48 ranking for the first time, but fatigue and pressure left the LAAC upstart stuck on 22. An ill-advised left-hand kill attempt from 38 feet at 22-17 hit the floor at the short line, handing O’Connor the serve. O’Connor scored eight consecutive points in one inning to crush Hernandez’s dream of becoming a ranked pro. “I just got tired in there,” lamented Hernandez.

Garner defeated Beall for the first time in several years to face O’Connor in the 5th place final. 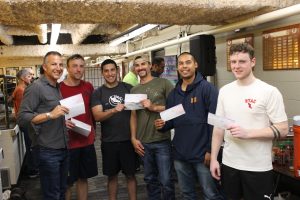 With both playing his third match of the day, O’Connor appeared to be in control with a 21-18 lead. Garner charged back, taking a 23-21 lead. Garner overcame two errors to cross the line and take 5th place. “This was really fun,” stated Garner. “I haven’t played in six months and my body is really sore. I forgot how hard handball is. It feels good to be back on the court.” 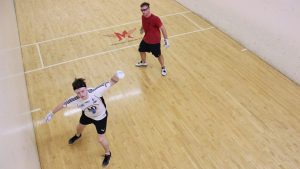 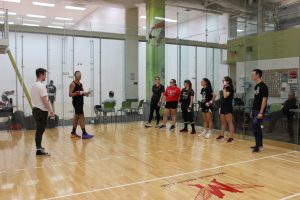 More than 90 handball players from across the country entered the men’s and women’s singles and doubles brackets at the famed Multnomah Athletic Club in downtown Portland, one of the world’s most prestigious athletic clubs. The MAC hosted the R48 Player’s Championship in 2016, producing electrifying handball on the most fan-friendly two-Wall glass exhibition court in the sport and the third edition of the Portland Classic and the third R48 stop at the MAC will undoubtedly produce more electrifying moments. 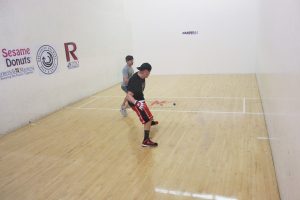 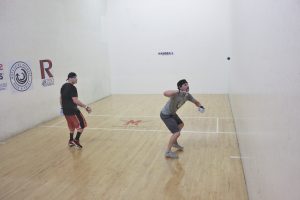 *Match of the Day*

Eight-time defending Oregon State champion and former top 30 R48 pro Dalton Beall faced former 3-Wall big ball king turned 4-Wall dynamo Boxer Rosales in Friday’s final round of 16 match. Very little separated the pair in both games, as Dalton scored his points off ace serves and back wall kills, while Boxer did his damage with fly kills and overhand passes. “If Boxer had a back wall he would be really dangerous,” stated R48 #6 and fan Vic Perez.

Beall escaped with a close win in game one, 15-12, and appeared to be in control in game two, building a 4-0 lead in his first service inning. Boxer kept charging, fighting his way into overtime. “Boxer’s nickname should actually be “Brawler,” stated Flores. Beall advanced to the round of eight in two close games, while Boxer announced himself as a worthy challenger to the King of the Pacific Northwest in the close loss. 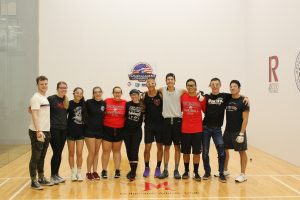 JR WPH was thrilled to host an instructional clinic for Pacific University’s handball team, focusing on the handball warm up and proper technique. The enthusiastic college handballers ranged from players with as little as five weeks of handball experience to seasoned three-year players who will be challenging for collegiate national titles this winter.

Following the instructional, the Pacific team put their new skills to the test in target hitting games and point play. “We love working with enthusiastic college handball teams,” stated WPH Master Instructor David Fink. “The collegiate handball players are the future of our game and to see their passion for the game and drive to improve is very inspiring.”

“This was so great for the kids to get to share the court with the pros and learn how to practice and strike the ball,” stated Pacific University assistant coach Craig Tull. “These kids hear it from me and Dave (Steinberg) all the time, but to hear it from the pros meant so much to them. This team will likely produce five national champions at the upcoming Collegiate Nationals.”