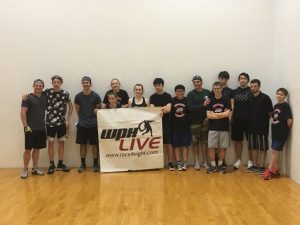 Seven-time Oregon State singles champion Dalton Beall would face a familiar cast of foes in his quest for #8, as sparring partner and OR rival Cody Townsend would be aiming to end Beall’s streak. Matt Steele, Bob Herrera, Sean Steele, Conor Casey, Josh Bateman, and several others would join Townsend in trying to dethrone Oregon’s king.

Kyle English and Pete Papathemetrios had a contentious opening round match, with a number of heated arguments over avoidable hinders and other unsportsmanlike behavior. Highly experienced referee Matt Steele kept the match under control, and English would end up wining in two games, 21-8, 21-20.

Josh Bateman defeated Pete Svennungsen in the final match of the night, winning 21-7, 21-19, and knocking out the last non-Oregonian in the draw.

Cody Townsend dazzled the crowd in the first game, defeating Kyle English 21-7. The lopsided match continued as Townsend took an 18-6 lead, at which point English was called for an avoidable hinder for violating Rule 4.8.C, “moving into the ball”. Stunned and frustrated, English decided to forfeit the remaining two points, resulting in Townsend advancing 21-7, 19-6.

*The tournament committee later reviewed and confirmed the avoidable hinder call as the correct call.

In the last quarterfinal match, Sean Steele pushed Bob Herrera to the limit in the first game but couldn’t seal the 21st point, leaving the door open for Herrera to sneak the first game out 21-20. Building on the momentum, Herrera closed out the second game 21-9 to advance to the semifinals.

Bob Herrera faced off with defending champion Dalton Beall in the first semifinal, pushing Beall in a way Beall is not usually pushed until the finals of local tournaments. However, Beall found his championship form once again and grinded out a victory, 21-12, 21-16.

A determined Cody Townsend came out firing on all cylinders in the second semifinal, as Matt Steele got blitzed 21-1 in the first game. Steele found his footing in the second game, but was only able to score 13 points as Townsend advanced to the finals 21-1, 21-13.

For the sixth time in the last eight years, Dalton Beall would face Cody Townsend in the finals, and for the eighth time in the last eight years, Beall would come out victorious. Townsend pushed his doubles partner to play his best, as the two stars displayed a highlight reel of kill shots, diving gets, and backwall-frontwall desperation shots. The scoreline did not accurately reflect the intensity of the match, as Beall secured his record eighth consecutive Oregon State Singles championship, winning 21-11, 21-16. “Dalton’s next state singles championship will tie him with the great Bob Schoning for the most state singles titles in Oregon history” announced Oregon Handball Chairman Nick Flores.

In the other semifinal, one-wall specialist Kimberley Duval found a way to cool the hot hands of Pacific coach Cassidy Hedger, using an aggressive style of play to control the match and advance to the finals, 21-5, 21-6.

The finals came down to experience, as Jean Kastner used angles and passes to frustrate Kimberley Duval, forcing the one-waller to take uncomfortable shots and give up front court position to chase down back wall shots. Kastner controlled the action from start to finish, winning 21-2, 21-1 to take back the women’s crown.

The first ever High School State Championship was held, as Horizon Christian School brought over a dozen students to the tournament. The students were broken into three round robin pools, with freshman Josh Rogers winning the A division, freshman Caleb Yuan winning the B division, and eighth grader Jacy Johnston winning the C division.

WPH pros Dalton Beall and Cody Townsend generously took time to provide a clinic for the students, with the superstars demonstrating skills to the youngsters and then engaging them in rallies. “The students absolutely loved connecting with the pros.” boasted coach Oscar Stenberg. “This has been such a rewarding experience for the students.”

Thank you to the tournament committee of Ed Fredenburgh (hospitality chair), Doug Woods (head referee), and Jim Keegan (floor manager) for keeping the tournament running smoothly. Thank you to the Alten Handball Foundation for sponsoring 30 juniors and students to enter the event, and thank you to the World Players of Handball for supporting both the Oregon State Championships as well as the Junior WPH Hood River program. Finally, thank you to the numerous sponsors, volunteers, and supporters, of whom there are simply too many to list.