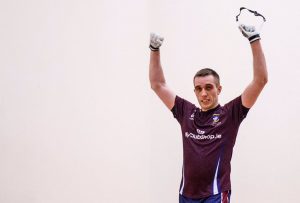 The greatest rivalry in handball continued on Saturday in Kingscourt, as the current All Ireland 40×20 and 60×30 champion and the reigning USHA national champion and World Handball Champion Martina McMahon met 16-time WR48 champion and WR48 #1 Catriona Casey. The two greatest players in women’s handball split the first two games with identical 21-12 score lines.

McMahon seized control in the third game, surging to a 10-1 lead. Casey chipped away at the lead, eventually taking control of the game with a 17-4 run to take an 18-14 advantage. Just as the pair had done in their two 2018 All Ireland finals, McMahon and Casey found themselves tied at 19. However, unlike in the two 2018 finals, Casey was able to cross the line, serving an ace at 19-19 and finishing the match with a second serve ace. 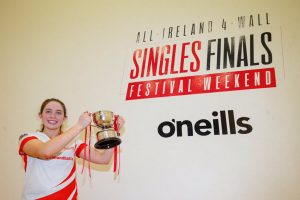 From GAA Handball: “Having lost her last two All-Ireland Finals 21-20 in the tiebreak to the same opponent….this time when she got to match point, at 20-19 in the tiebreak, she was not to be stopped! These two simply never fail to provide outrageous entertainment! What a huge win for Catriona Casey and what mental strength she showed as tonight she was crowned 2019 O’Neills All-Ireland Ladies 4-Wall Championship for the 4th time.” 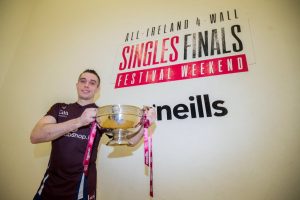 McCarthy maintained a slight advantage throughout the second half of the one-hour first game against Nash, ultimately closing out the game with a left-handed back wall kill after Nash saved McCarthy’s first game point with a flat roll out.

Nash took an 8-4 lead in game two, only to see the advantage erased by a 13-3 McCarthy run. Nash closed the gap to 15-17, but McCarthy was too strong in the final moments, closing out the match to win his fourth All Ireland 40×20 championship.

“Robbie served very well today and his paddles were deadly like usual,” stated broadcast analyst Mulkerrins. “His movement was good today and he got some great gets.”

From GAA Handball: “Mullingar maestro Robbie McCarthy is the 2019 O’Neills All-Ireland 4-Wall champion, erupting in emotional celebrations upon sealing his 4th title, against Clare’s Diarmaid Nash in a late night shoot out at a jammed Kingscourt HC tonight.”