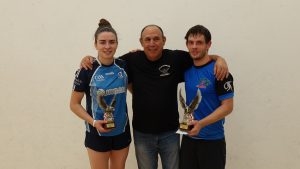 The mission of the 2019 Armed Forces Tribute Tournament is to honor our veterans on Memorial Day weekend. “San Diego hosted the Semper Fi tournament for a lot of years on the marine base just outside of San Diego, but the marine base lost its courts in the last couple of years,” stated 2019 Armed Forces Tribute Tournament director and USHA Hall of Fame member Fred Lewis. “We want to continue to honor our military heroes and keep the tournament going.” 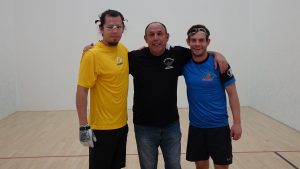 Killian Carroll cruised to the final of his third Armed Forces Tribute event, overcoming two lefties en route to the final in the upper bracket. R48 #4 Lucho Cordova eliminated local favorites Abraham Montijo and Sean Lenning in the bottom bracket, setting the stage for a blockbuster final in what has become one of the most exciting rivalries in the sport.

Carroll and Cordova traded six consecutive side outs at 2-2 in game one before a Carroll hot streak enabled the R48 #1 to race to a 9-2 lead in one inning. Carroll remained in control throughout game one, neutralizing Lucho’s offense and executing a number of left-handed flat roll outs, many coming from 38 feet. “This is the best handball I’ve ever seen,” proclaimed top Tucson Master’s star Andy Wills. “The guy has no off hand!”

After taking game one 21-8, Carroll seized control of game two with a 10-0 start. Carroll’s “Stripe Show” was sensational on Memorial Day Weekend, striking virtually every shot on the sweet spot of his hand, with nearly every offensive opportunity finding the bottom board. Carroll allowed an exhausted Cordova back into the game with a slew of errors, as Lucho climbed to within three at 12-15. Carroll shut the door at 12-15, scoring six of the final seven points of the match to clinch his third consecutive Armed Forces Tribute title.

“I watch these guys to try to improve my game but they play at a level that is just beyond comprehension,” stated SR48 player Mike Vane. 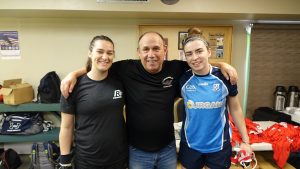 Ciana Ni Churraoin headed straight to Tucson from Salt Lake City, aiming to erase the disappointment from losing in the WR48 Player’s Championship semifinal. CNC met Tucson’s Ashley Moler in the final, with CNC seeking her first Armed Forces Tribute title. CNC dominated the action in a two-game sweep, showcasing the power and athleticism that has had seen her climb to #2 on the WR48 tour.

“You really have to be court side to appreciate Ciana’s power and speed,” stated Armed Forces Women’s finals referee and USHA Level 5 referee Matt Krueger.

Thank you to Fred Lewis, Vince San Angelo, Charlie Wicker, Abe Montijo, and all of the volunteers who made the Armed Forces Tribute such a huge success.

“The Armed Forces Tribute has quickly established itself as one of the premiere events in the country for its hospitality and world-class handball,” stated USHA Development Director Matt Krueger. “We’re lucky to have the AFT in Tucson!”