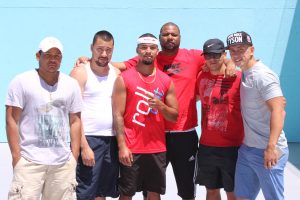 Las Vegas, NV, WPH Press, 5/14/17- Sunday featured the WPH Outdoor number one and two pros squaring off in the singles final and teaming up in the doubles final, as well as 9-time national singles champion David Chapman appearing in his first WPH Outdoor 40+ singles final. 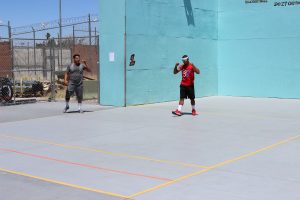 survived four match points in a semifinal thriller, while WPH Outdoor #1 Samzon Hernandez cruised to the final without dropping a game. Hernandez was appearing in his fourth singles final of the season in four events and in search of his second title, while Gonzalez was appearing in his second final of the season in search of his first title. The pair met in two finals in Las Vegas previously, with Hernandez defeating Gonzalez in their two previous Vegas encounters at the WPH 3WallBall Royal Flush final in February and the 2014 Vegas 3WallBall Lte. 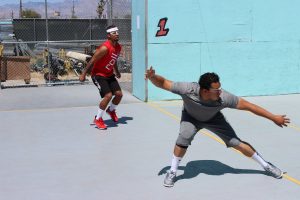 Samzon and Timbo played exceptional handball throughout the grueling final, with both superstars sacrificing their bodies on the 120-degree concrete on multiple occasions. Hernandez was able to escape with a first-game victory, crossing the finish line with a patented left-handed kill. Gonzalez appeared to be in dire straights, trailing 6-9 in game two, but as he has done on so many occasions on the WPH Outdoor tour, Gonzalez summoned his best handball when he needed it most. “I knew Samzon was tired because I could hear him breathing so I just kept pushing,” stated Gonalez. Gonzalez caught Hernandez at 13 and forced a decider with a 15-13 win.

Gonzalez started quickly in the tiebreaker, overwhelming Hernandez with pressure, speed, and power to build a 7-1 lead. With Gonzalez leading 11-5, Hernandez started his comeback. “What makes Samzon so tough is that he just plays harder and better when he’s down,” stated WPH Outdoor #1 Tanisha Groomes watching from court side. Gonzalez missed three consecutive drive shots down the left line by a combined three inches, while watching helplessly as Samzon rolled out three shots right in front of him, narrowing his lead to 11-10. “Samzon does this really good stuff with his wrists when he gets down that just makes the ball die and that’s what was happening during that comeback,” stated Gonzalez. Gonzalez regrouped with a timeout and closed out the WPH Outdoor #1 for his second consecutive Vegas Lte title. “This is really my dream, to have beat Sean Lenning in 3-Wall small ball and Santos and Samzon in 3-Wall big ball singles,” stated Gonzalez. 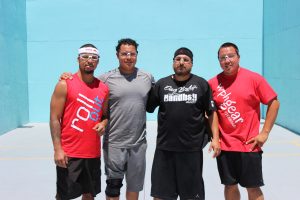 Hernandez and Gonzalez teamed up for the first time in doubles and were dominant en route to the final in the upper bracket. WPH Outdoor 6 Salt Lake City singles champion Alfredo Morales teamed with Esteban Erazo and met Team Hernandez/Gonzalez in the final, having dispatched Chava Cordova and Manuel Areola in the semifinals of the bottom bracket.

Team Hernandez/Gonzalez cruised in the final, dispatching Team Morales/Erazo to complete the “Timbo Slam” for the second consecutive year at the Vegas Lte. “Playing with Samzon (for the first time) was great,” barked Gonzalez. “I’m just the support player and I know my role. I just stay steady and make good digs and serve hard to get him setups. He’s a machine and he controls the game well and I just bring him the shots and pump him up.” 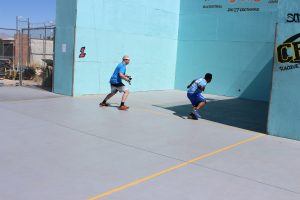 Making his first tournament start in more than three years, David Chapman proved that he still has the game to be a force outside or inside. Chapman advanced to the 40+ singles final with impressive wins against Silver Olmedo and Mauricio Delatorre, while top-seeded Javi Flores also advanced to the final with impressive wins against Salt Lake City Aces tournament director Ruben Garza and Gortari Arroyo.

Chapman started fast in game one, building a mid-game lead before Flores took control. Flores pounced on Chapman’s weak service returns for quick points and a one-game lead. “My return of serve was just terrible in that first game,” Chapman would later say. Chapman would turn the tide in game two, pushing his returns deep and down the walls and executing a variety of rally-ending shots to force a tiebreaker. Chapman appeared to have the match won at 11-5 in the decider, but Flores caught fire, making dump kills and diving kills to close the gap. Seven consecutive points gave Flores the lead, but a costly Flores error tied the pair at 12. Flores made a return of serve error at 12-12 that handed Chapman the lead for good. “That was a tough serve and I felt like I was in the perfect spot for a kill if the return made the wall,” stated Chapman. Chapman closed out the match with two consecutive points, picking up his first WPH Outdoor title. 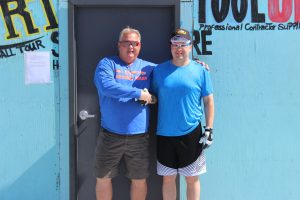 Thank you to 3WallBall’s Mike Coulter, the Stratosphere Hotel and Casino, and the WPH for hosting and covering the 2017 WPH 3WallBall Vegas Lte Gold Cup. See you in September 21-24 for the WPH 3WallBall Outdoor World Championships! 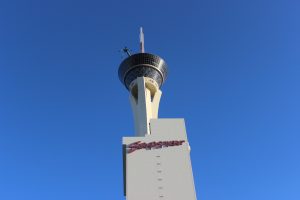 Top-seeded and WPH Outdoor #1 Samzon Hernandez played flawlessly in advancing to the semifinals, while Alfredo Morales was efficient in defeating WPH Outdoor ironman Sal Duenas to setup a semifinal clash with Hernandez. 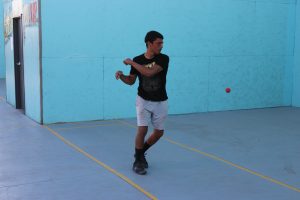 Chava Cordova and Pedro “Hershey” Carmona played the closest match of the quarterfinals in the third quarterfinal of the day, splitting 15-13 games to force a decider. Seemingly out of gas and moments from defeat on the 105 degree Stratosphere courts, “Hershey” rallied from a 4-12 deficit to tie the score at 12. “Hershey” earned a front court setup on the 17th shot of the 12-12 rally but skipped it to hand Chava a 13-12 lead. Another Carmona error gave Cordova match point, with Cordova capitalizing on his second match point chance to win 15-13. “That was definitely the match of the tournament,” stated referee Sal Duenas. “For him (Carmona) to come back from 4-12, wow.” Second-seeded Timbo Gonzalez faced game points at 12-14 against an inspired Chris Tojin in the final quarterfinal but scored the final three points of the game and cruised in game two to advance to the bottom bracket semifinal. “I’ve never seen Chris play as well as he did tonight and make those kinds of shots,” barked Gonzalez.

Samzon Hernandez was seeking revenge against Alfredo Morales in the upper bracket semifinal after losing to Morales in Salt Lake City last month and played like a man possessed in the first game. Hernandez built a 7-1 lead and continued to play nearly perfect handball en route to a 15-5 first game domination. “Samzon has hit every spot and every shot he went for,” stated WPH Outdoor pro Andres Calle. Hernanadez started well in game two as well but was matched by Morales with tremendous offense and defense. The lead changed hands three times, with the pair ultimately tied at 11. Two short-hop kills from Hernandez were the difference, as Hernandez advanced to his first Vegas Lte final in two years.

The bottom bracket semifinal between Timbo Gonzalez and Chava Cordova was one for the ages between the two early-twenty-something WPH Outdoor stars. Cordova entered the match having never defeated Gonzalez in tournament singles but showed no ill effects of his previous losses to Gonzalez in the match. Gonzalez led 14-12 and stood just one point from a one-game lead, but just like Tojin against Gonzalez in the previous round, Gonzalez could not score the final point, as Cordova took a one-game lead, 15-14. Neither player could separate himself by more than three points in game two, with the momentum never clearly shifting in either’s favor. Gonzalez clung to a 14-13 lead but Cordova tied the score at 14 to serve for the match. An overly safe Cordova serve to the right setup a Gonzalez drive pass to the pass, just out of Cordova’s reach, forcing a third game. “That’s the same kind of driving down-the-wall pass I hit in 1-Wall and I knew he’d be moving to the left after the serve and it worked perfectly,” stated Gonzalez. 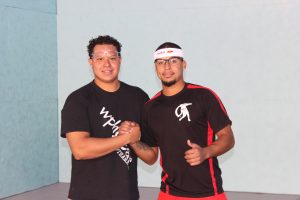 Gonzalez appeared to take control in the third game after escaping match point, scoring the first three points of the tiebreaker, but Cordova came roaring back, taking a 9-6 lead. Gonzalez scored the next five points to lead 11-9, but an uncharacteristic error closed the gap to 10-11. Cordova scored three more points consecutively to lead 13-11, just two points from the match. The rally of the year ensured, with both Cordova and Gonzalez hitting the concrete three times apiece. On the 19th shot of the rally Cordova hit a stiff-arm windmill left corner kill that appeared to rollout flat. Gonzalez disputed the call for several minutes, claiming that the back had backspin, thus meaning the shot had skipped. The referee and the line judges did not see a skip, giving Cordova match point at 14-12. Gonzalez regrouped after a five-minute timeout, scoring two points to tie the score at 14-14. With Cordova pinned on the right, Gonzalez hit a perfect out-the-door pass that landed just inside the sideline on the left to clinch the match, holding off four match points in the process. “Chava was just playing amazing today,” stated Gonzalez. “People may have thought I would let that call at 14 in the third game get to me but I have a new focus and bad calls don’t stop me. Chava was getting everything and getting balls that only a few people on the planet can get so I started passing more and that’s what I did on match point. 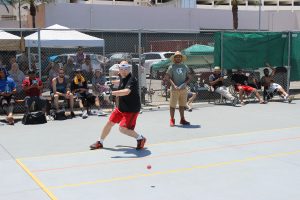 David Chapman made his first tournament start in more than three years and demonstrated the skills that made him one of the greatest handball players to ever lace up the gloves in defeating former 40+ WPH Outdoor champion Mauricio Delatorre in the semifinals. “I feel really good and my shots are still there,” remarked Chapman after advancing to the final. Chapman will play top-seeded Javi Flores in Sunday’s final.

WPH Outdoor #1 Samzon Hernandez teamed with WPH Outdoor #7 Chava Cordova for an exciting JR WPH clinic and skills competition at the 2017 WPH 3WallBall Vegas Lte Gold Cup. Coaches Hernandez and Cordova explained and demonstrated the proper techniques of the stiff arm left corer kill and stiff arm “out the door” kill. After practicing the shots, junior players had an opportunity to play points against the pros, with several of the junior players stunning the pros with exceptional skills to win points. Thank you to Samzon and Chava for inspiring the next generation of players!