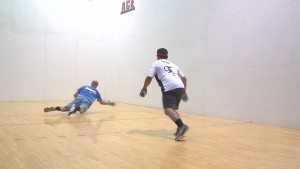 Entering the Salt Lake City Player’s Championship, just a month back, Sean Lenning was just appearing in his second R48 IV final of the season (Houston), while Armando Ortiz was appearing in his first final since the 2013 R48 III Plummer Bash. The pair staged the WPH R48 “Match of the Year”, splitting the first two games with astonishing shot making and power. The third game featured the highest drama of the R48 IV season, as the two traded the lead and momentum on several occasions. It was Lenning who would ultimately emerge, holding off an inspired Ortiz to claim his first WPH Player’s Championship.

We at the WPH congratulate Sean Lenning (AZ) for winning the “Comeback Player of the Year Award,” plus his SLC finals counterpart, Armando Ortiz, for being involved in the “WPH Men’s Match of the Year.”