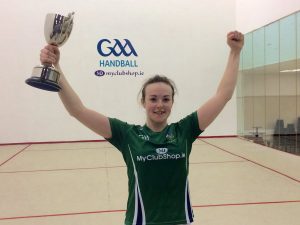 Playing in her third consecutive All Ireland 60×30 Women’s Senior Singles Championship, Martina McMahon was determined to make her third final the charm, while preventing four-time defending All Ireland 60×30 defending champion Catriona Casey from matching a record-tying fifth consecutive title. The final was held at Ireland’s famed Croke Park for the first time since 2009, with the home of the GAA showcasing the world’s most spectacular 60×30 court, complete with a 60-foot long glass right side wall and the most fans to ever watch a 60×30 match.

Read what Martina has to say about her preparation, what she was feeling and experiencing in the court during the three-game thriller, how she reacted after the match, her upcoming goals, and who she recognized following her greatest handball accomplishment.

Martina on her preparation

This year I was much more prepared than the previous two years. It was a goal I set out for myself after losing last year’s final that I wasn’t going to be defeated by silly mistakes on my part this year. I said to myself “if Catriona was to beat me this year, it will be a hard fought battle where luck might decide the winner.  I was not going to be the one to lose patience and hit the ball into the floor”. So I trained harder. I played different people to mix up my training games, I went and practiced what I thought were some of my notable weaknesses by spending time in the court on my own a couple of nights a week. But most importantly, I actually believed in myself for once. I was happy with how I was playing this year, but I did feel I didn’t give my best performance in the All Ireland Semi-final.  However, I saw that as a good thing. I feel everyone has a bad game somewhere down the line, especially when you’re training 4/5 nights a week for a number of months, its hard to maintain consistency. I was thankful I got the bad game out of my system in the Semi final and I was still fortunate enough to come out the winner. I guess, mentally it set me up for the final. 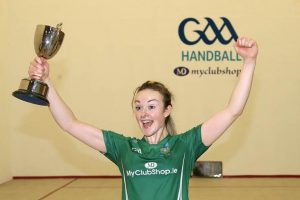 I started off well and to be honest, everything felt perfect. I was happy with how I was connecting with the ball and I was happy with how my kills were coming off. Everything seemed to go right for me. Once I got one or two kills I kept going for them and they came off. I played safe until the opportunity arose to kill the ball. Catriona got a good serve going but I adapted to it quicker than usual and closed out game one 21-10.

The second game was nip and tuck. I took an early lead but seemed to have a nap half way through. Of course, when you’re playing Catriona you can’t afford to slack off or you will be punished and that’s exactly what she did. She got the upper hand, she got a run of serving which left me with a weaker return than I’d have liked. I woke up again when Catriona got to 20, I adapted to the serve but it was too late. Catriona closed the game 21-14.

The third game I had first serve but Catriona got me out straight away. She went into a 5-0 lead as she took advantage of the right glass wall and glass back wall again. I knew I had to attack the serve to be in with a chance of making my dream come true, and that’s exactly what I did. I got her out and brought it back to 5-4. We were tied at 7-7 before I drove on and played like I did in game 1 to close it out 21-10.

The game went on for 1hr 45mins in which no timeouts are allowed. So once the game started it was up to myself to change plan, I couldn’t take a time out to get my coaches advice. In between games was the only chance we could talk, so I made sure to listen for those couple of minutesJ

I must admit I went crazy after scoring the last point. My legs went like jelly and I got shivers down my spine. I let out a roar and clinched my fists so tight as I looked to my supporters that travelled up on the day. My coach says I could be embarrassed when I see the video as he  thought I was going to turn into a female hulk haJ After my craziness, I was walked out the steps of the court and gave my mother a big hug needless to say. I must admit I think she played every ball too. The feeling was surreal, I celebrated after the win but a part of me still couldn’t believe I won, its only sinking in now.

Martina on what it meant to fulfill her dream

I always dreamt about winning the match but I don’t know if I ever felt I could 100% win. I suppose I thought of “imagine if I won” but Catriona being Catriona wasn’t long shutting up the voice in my head when she took the second game. When I went in to the tie-breaker, even serving at 20 I still wasn’t sure if I could win this game. Catriona fights to the bitter end so the game wasn’t over even though I had a 10 point lead. I suppose you could say I felt I could win when I saw my last shot go up on the wall in the third game for the 21st ace haJ

This title means an awful lot to me. Winning an All-Ireland Senior title is amazing especially when you do so against a player of Catriona’s calibre. She’s an amazing athlete and I’m just thankful I came out the winner on Saturday.

My main goal now is to focus on the 60×30 Senior Doubles. I have the All Ireland Semi Final next Saturday the 17th September and if I and my partner are fortunate enough to win, the Final will be the following Saturday in Croke Park. Needless to say Catriona is on the opposite side of the draw and if we both proceed we will meet again in the doubles final. But im not thinking about that yet.  For now I’m going back training, the weekend is over, I rested/celebrated yesterday (Sunday). It is time to focus on the All-Ireland Senior Doubles Semi-Final now.

Martina gives thanks and pays tribute to Ducksy Walsh

I just want to say a huge thank you to my fellow clubmates, Pat, Evan and Shane Murphy, John and Patrick Noonan and Denis Donegan for giving me games throughout the season at any time of the night (one night we started playing at 10pm and weren’t home until 3am!) and also for making the journey to all my games for the season. I also want to say thanks to my family for being supportive of me throughtout my handball life. Im away nearly every weekend so much so we nearly have to make appointments to see each other. And last but not least, I want to thank my mother Rose McMahon for being so supportive, she’s always by my side and without her I wouldn’t be playing handball today.

I’d also like to dedicate my win to my Grandmother Delia Hickey whom I know was with me on Saturday. She was my best friend and I know if she was here today, she’d be having a drink out of the cup!

Lastly, I want to mention the late Michael Ducksy Walsh who we lost earlier this year. Unfortunately, Ducksy wasn’t around to see the games being brought back to Croke Park. Ducksy  won all of his softball senior titles there and was deemed to know the court like the back of his hand.  However, Ducksy knew every court! I’m sure he would have loved to be there on Saturday and who knows he might have been playing in the Men’s final himself if he were here.