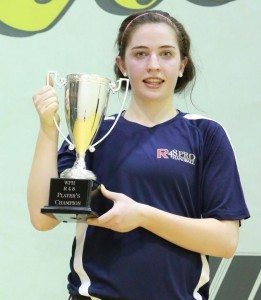 “I expect that qualifying will be very tough,” revealed the current WR48 #1. “While I have some experience in sparring with male pros, I know competitive action is a completely different ball game. I do hope to give a good account of myself, as I’m not there to waste anyone’s time. The women’s competition is obviously my main priority. If I thought playing both would compromise my efforts in the women’s bracket in any way I wouldn’t do it.” 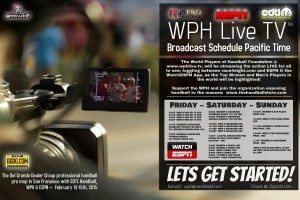 Casey will not be the first woman to play in a men’s pro qualifier, as former number one women’s pros Anna Engele and Priscilla Shumate both dabbled in pro qualifiers in the early 2000’s.  [Megan Mehilos, arguably the best American Women’s Player, has played in pro level men’s events within the past 10 years and with some success] “Catriona seems to be able to handle tournament pressure better than anyone I’ve encountered,” stated 11-time USHA 4-Wall National Women’s Singles Champion and future Hall of Famer Anna Engele. “Catriona will do very well in the qualifier. She’s an amazing player. Catriona is one of the most composed and intelligent players I’ve ever seen play the game, and I wish her the best of luck and hope she enjoys the experience.”

“Having played Catriona on a number of occasions, I know she has all of the shots and requisite skills to succeed against any player in the qualifier draw,” revealed former Senior Race 4 Eight finalist and WPH Executive Director David Vincent. “Casey’s foray into the San Francisco qualifier is incredibly exciting for our tour and I can’t wait to watch her in action. I think she could win her opening round and I do expect her to advance to a men’s final.” 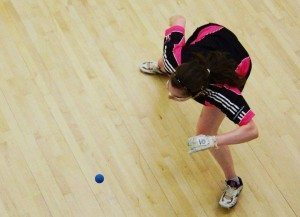 Casey anticipates having to make slight adjustments in her playing style and strategy in the qualifier when challenging the game’s top stars in the R48 qualifier. “I think I’ll have to be more aggressive in my approach and maybe take more risks than I normally would. I look forward to playing the one game to 25 format, as it should be fun!”

The qualifier will not be broadcast LIVE, due to some filming restrictions; however, the WPH will chronicle Casey’s play.