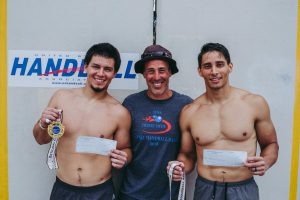 Tyree was solid but unspectacular in his quest for his sixth USHA One-Wall National title, overcoming grizzled 1-Wall veteran Saul Gonzalez in a tiebreaker in the quarterfinals and winning a close first game and leading midway through the second game his semifinal clash with Mike Schneider before Schneider was forced to retire with an injury. “Tyree does not look as fit as he normally is but he’s still great,” stated R48 star and 2018 USHA One-Wall Nationals quarterfinalist Stephen Cooney.

Jurell Bastidas emerged in the bottom half of the draw, blitzing Stephen Cooney in the quarterfinals and narrowly escaping 1-Wall legend Pee Wee Castro in the semifinals. Jurell dropped game one against Castro and stood just four points from defeat in game two but rallied, winning a close second game and pulling away midway through the tiebreaker. “Jurell is really a beast, it was awesome playing him and he was definitely my pick to win the tournament,” stated Cooney.

The battle of the brothers in the final featured new father Tyree and soon-to-be first-time father Jurell in a battle of two of the hardest hitters and most skilled 1-Wall superstars in history.

Tyree trailed early in game one of the final but battled back, eventually catching his older brother at 15. “After a great start and a Tyree comeback, Jurell was able to gain back the momentum and close out game one,” stated WPH donor and reporter Jared Vale.

Tyree quickly evened the match to force a tiebreaker with a dominant game two win. “Tyree was in full control in game two and never lost it,” stated Vale.

Tyree raced to a 5-0 lead in the tiebreaker, seemingly on the verge of his sixth title. “It looked like the match was over at the point,” stated Vale. “Jurell rallied back and at 10-8 Tyree, Tyree swerved out twice. Despite those errors, Tyree closed out the match in his next inning.”

Tyree completed the slam, teaming with Jurell to defeat Victor Lopierre and Alvaro Rebaza in two games. “Tyree and Jurell were too much for Alvaro and Victor,” stated Vale. “There were a lot of great rallies and kills, but in the end, both games were controlled and won by the Bastidas brothers.”

Photo by Bill Fand from tyreebastidas.com

Thank you to WPH reporters Stephen Cooney and Jared Vale. Photos by Bill Fand from tyreebastidas.com and USHA.