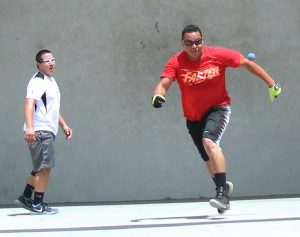 Team USA and Team Mexico split the first two games in the one-match exhibition and it appeared that Team Mexico would defend its home court in the tiebreaker, as Muneco led his team and country to a 12-8 lead in the decider to 15. Team USA rallied, overcoming exhaustion and a boisterous crowd to stun Muneco and Depo.

“The 2-Wall game is a whole different level of playing,” explained Hernandez. “Those guys specialize in the long 2-Wall courts, known in Mexico as Fronton. Muneco is the top Fronton player so we really had our work cut out for us. Things didn’t look good for us at 8-12 in the tiebreaker but we managed to pull it out for the win. It was really tiring. You need more energy in the long courts to return the ball. The rallies are long and you really start to get tired. Normally you have to hit the ball above the red line on the front wall, but we compromised and we were allowed to hit kills (below the red line).”

Follow all of the latest WPH Outdoor news HERE