The Coaching Center: The Most Important Shot 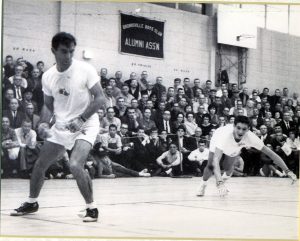 Obert won 42 open national and world titles (which includes twenty open USHA national titles), more than any other player in the history of the sport. Oscar Obert, together with his younger brothers Carl and Ruby, were dominant players in the mid-1950s through to the mid-1960s, winning 92 open national and world titles, including consecutive championships in the early sixties in both singles and doubles. He was inducted into the Handball Hall of Fame in 1972.