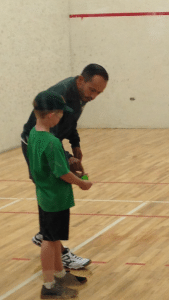 The World Players of Handball and Jake Plummer were thrilled to present a sensational junior handball clinic at the Plummer Helluva Family Bash 6. Fresh off of his semifinals appearance at the Bash, #3 ranked WPH pro Naty Alvarado Jr. joined NFL legend and Plummer Bash host Jake Plummer in introducing the game to several enthusiastic youngsters in a spectacular junior handball clinic.

“Jake loves teaching kids and has a ton of energy and attention for them,” stated Alvarado. “The nervousness these kids have in the beginning of the clinic is quite pure, but once the kids start hitting the ball, that anxiousness dissipates and they really relish the challenge. I learned a lot from the kids, as I had to tell them how to hit and where to hit. I thoroughly enjoyed myself and I look forward to coaching more Junior WPH clinics in the future.”

The WPH would like to thank Naty Alvarado, Jr. and Jake Plummer for lending their legendary statuses towards growing the game of handball. The WPH has hosted over 500 junior handball clinics this year for juniors of all skill levels and has a number of clinics planned between now and the end of the year. The mission of the WPH is to inspire as many young people as possible to play the great game of handball. Please consider joining our team as a volunteer coach and developing the next generation of handball players!

To make a tax-deductible donation and support the growth of the game, please donate on-line atwww.thehandballstore.com, send your generous gifts through PayPal (extremehandball@cs.com) or by mailing checks to:  WPH, 4556 E Camp Lowell Rd, Tucson, AZ, 85712.100% of the donations received by the WPH go towards junior handball development.