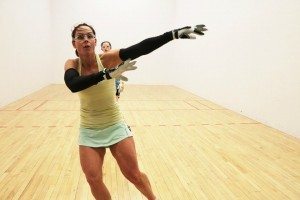 Coach (now/ever): no coach. My dad taught me the game between age of 14-17 but I have never been coached

Best tournament ever won: My first Worlds when I won the B singles against Lupita Alvarado Bike.  She beat me the day before for the junior title so I really wanted to get her back ! Haha

How long have you been playing: I started when I was 13.  I played once or twice a week for a couple years but when I got into high school and then University, I usually would only play before a tournament.  Now with my career and family I don’t play except for tournaments.

What are your goals in handball going forward: I really like big ball so I’m going to try to get to LA and NY this summer to play some outdoor events. I don’t have any goals except to try to stay healthy.

What do you love about handball: The travel and the people.

How would you describe your game: When I was playing and traveling during the years of the pro tour I would say that my game was very offensive.  However, since I don’t play much anymore, I am just happy to not make hand errors!

What is your best shot: back wall kill

Who has inspired you to play this game at such a high level: Myself.

Who do you think is the women’s best player of all time: I never saw Rosemary Bellini play in her prime.  Both Lisa Fraser Gilmore and Anna Engle are in my top

Which women’s pro would you most like to have played in her prime: Rosemary Bellini