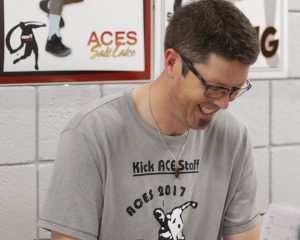 The Sports Mall in Murray Utah was the host venue for the 2018 edition of Utah State Doubles Handball Tournament, featuring the strongest field in years with 16 amazing teams in the Open and the A. 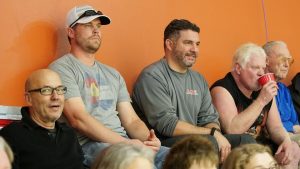 Scogin/Bell led 10-7 in the tiebreaker and the match appeared be over, but with a side out and another serve opportunity, McManus got hot and scored the next four points to secure the team win, 11-10.

The A, also loaded with talent, saw Adam Cahoon/Bryce Brown falling to crowd favorite George Blocker and new partner Sean Von Roenn in the top half of the draw, while the bottom half of the draw saw Dom Alvarado/Levi McCormick take down AJ Allan/Jon Larson in two straight. In the final Blocker/Von Roenn squeaked out the victory in yet another exciting breaker.

The 50+ bracket would be a round robin format, with four strong teams consisting of Larry Lewis/Dave Leopardi, Lon Stalsberg/Ruben Garza, Rick Muldover/Scott Beebe and John Wainright/Dan Price. After battling all weekend, it was Wainright/Price taking home the hardware with three wins, while Stalsberg/Garza took second place with two victories. 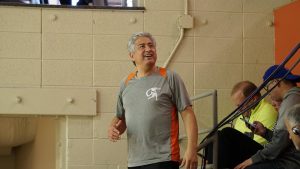 The Utah State Doubles was awesome handball and congratulations to all of this year’s champions and finalists.

Thank you for everyone’s help this year, especially the draws and all of the amazing food and beverage.