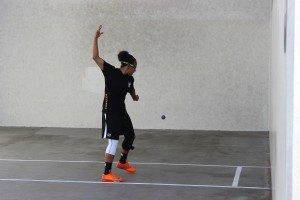 Catriona Casey slammed the Xrossover Revolution, adding the women’s big ball title to Saturday’s small ball title. Casey avenged her 2014 loss to WPH Outdoor Women’s #1 Tanisha Groomes and handing the #1 just her second big ball singles loss in 18 events. Casey trailed 6-4 in the tiebreaker against Groomes in the semifinals after dropping game one and evening the match at one game-all with a second game victory. As Casey had done in the small ball final, Casey ended the match by scoring the final seven points to advance to the final. Casey faced New York’s all-around handball superstar Danielle Daskalakis in the women’s big ball final. Casey dropped game one before rallying to dominate games two and three to become the only player in the Xrossover Revolution to win both the small ball and big ball events. 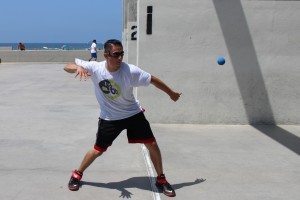 Top seeds Juan Santos and Samzon Hernandez appeared to be on a collision course to face one another in the finals but their semifinal opponents had other ideas. Ramon “Lobo” Valencia overwhelmed his frequent sparring partner and #1 WPH Outdoor star with precise lobs and perfectly placed “drop” kills. Lobo earned the biggest win of his WPH Outdoor career, advancing to his first singles final, 11-7, 11-8.