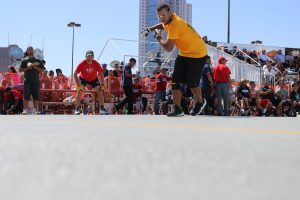 Las Vegas, NV, WPH Press, 9/29/19- The final day of the 2019 3WB Outdoor World Championships featured the best of the best in 3WallBall and 1WallBall big ball and small ball handball, as the game’s greats added their names to the coveted 3WB list of champions.

Timbo Gonzalez was playing in his third consecutive final when he faced Joe Kaplan for the ValeU Group 1-Wall small ball title, having just won the 1-Wall big ball and 3-Wall big ball titles. Timbo was ruthless against his New York rival, keeping Kaplan behind him and controlling the center of the court. Timbo built a 17-2 lead in the one game match to 21 but developed a severe cramp in his calf. Following three consecutive timeouts, Timbo was immobile, unable to move forward and barely able to move more than one step. With the door ajar, Kaplan was unable to take advantage, hitting the ball to Timbo or making errors. “I just didn’t have anything today,” lamented Kaplan. Timbo was able to close out the match with a lob serve and effective blocking, taking his third title of the day. Thank you to Jared Vale and the ValeU Group for their generous sponsorship of the 1-Wall small ball singles! 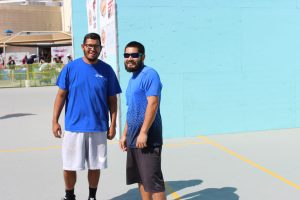 Cinderella Finalists Brian Medina and Marco Alatorre battled for their first major singles title on 3WB’s center stage on Sunday morning. Known as the “Silent Assassin” for always letting his game do the talking, Medina used angles and deep drives to take game one against his younger adversary. Alatorre built a 7-4 lead in game two but could not sustain his momentum, falling in two games to Medina. 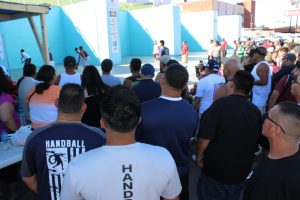 California’s Mauricio “Cameron” Molina… faced New York’s Javier Gonzalez in a battle of big ball’s next generation. At just 16, Cameron is already a force on the California big ball scene, while Javi is close to receiving his “A” card in New York’s highly competitive 1-Wall big ball scene, and after spending three months in Southern California earlier this year playing 3-Wall, has quickly adapted to the 3-Wall game.

The next generation stars battled throughout the first game, exchanging the lead and trading kill shots. Cameron mistakenly thought Javi picked up a double bounce at 12-all, catching the ball and forfeiting the point, with the blunder likely costing Cameron the first game. “I was definitely nervous after losing that first game but I had to just keep going,” stated Cameron. Cameron evened the match against Javi with a dominating second-game win and continued to outplay his New York challenger in game three, eventually taking the title and call-up to the majors. 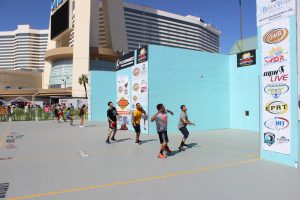 Timbo Gonzalez and Capullo Areola faced Samzon Hernandez and Danny Vasquez for the 3-Wall big ball doubles title in front a completely packed 3WB bleachers. “This is just awesome to see,” stated 3WB founder Mike Coulter looking at the bleachers packed with hundreds of fans. “All of these people are enjoying great handball and having a great time. This is what it’s all about.”

Team Timbo/Capullo took game one but fell behind 8-4 in game two. Timbo encouraged his partner to return deeper, which Capullo did successfully. Following the neutralizing Capullo return of serve, Timbo took over the rallies, scoring five consecutive points with corner kills to tie the game at 12 and closing out the match with another corner kill. 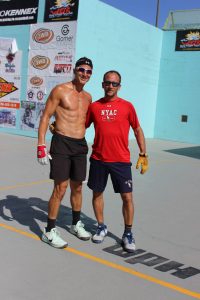 40-somethings David Fink and Joe Kaplan met in the 3WB 3-Wall small ball singles final, with both seeking their first 3WB title. After falling behind 0-3 in game one, Fink rattled off 27 consecutive points, serving aces and fly-killing Kaplan’s returns to take command of the match. Kaplan ended Fink’s streak at 0-12 in game two, but could not apply much pressure from there.

Timbo Gonzalez arrived on site all business on Sunday morning and took that mentality to the court against his frequent 1-Wall rival Tywan Cook. Gonzalez overwhelmed Cook in the first half of the first game, building a 13-2 lead in the one game final to 21. “I knew I had to start strong against Tywan because he can get hot at any time.” Cook did find his game, stiff-arm killing a number of balls to pull within three at 11-14. Cook misjudged Timbo’s service return at 11-14, letting the ball bounce over his head rather than playing it. The ball landed in, and seemed to swing the momentum back in Timbo’s favor. Cook had several chances to pull close to Gonzalez late, but four left-hand unforced errors sunk the Cook ship. Gonzalez closed out the match with a patented left-hand cross court whip kill to take the title. 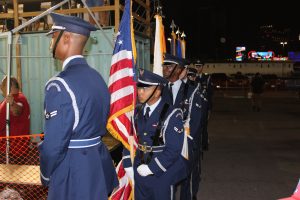 Thank you to 3WB and all of its sponsors and incredible staff for a sensational 10th 3WB Outdoor World Championships. Thank you to 3WB founder and pioneer Mike Coulter, 3WB tournament director Peggine Telez, 3WB handball directors Tom and Javi Flores, 3WB director Randy Lam, and all who made the 2019 3WB such a great event.

Thank you to the WPH for covering the event and all of the pictures and daily reports. 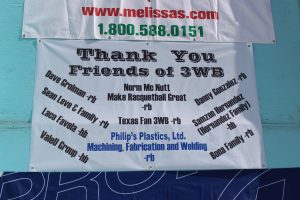 Las Vegas, NV, WPH Press, 9/28/19- Day two at THE STRAT featured an action-packed day of 3WallBall and 1WallBall big ball and small ball action, as handballers filled the courts from 7 am until well past sundown in the desert.

Samzon Hernandez played nothing like the 3-Wall big ball #1, falling meekly in the quarterfinals to young Marco Alatorre. Alatorre continued his stellar play, ousting New York’s Hector “Pito” Velez in the semifinals to announce himself as a star in 3-Wall big ball handball.

Sunday’s final will guarantee a first-time 3-Wall big ball champion at the 3WB. 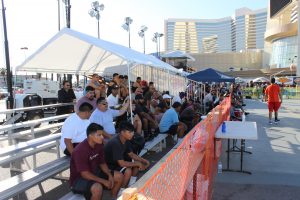 Samzon bounced back in doubles, jumping on the back of 19-year old Danny Vasquez to take down two of New York’s best teams in thrilling tiebreakers, complete with hundreds of screaming fans and dozens of incredible shots. Team Hernandez/Vasquez won back-to-back 15-12 tiebreakers against Team Velez/Cook and Team Accardi/Sanford. “Now that was fun,” exclaimed Hernandez, who was playing to the crowd throughout both matches.

Second-seeded Team Capullo Areola and Timbo Gonzalez cruised in the bottom bracket to advance to the final, sweeping both of their Saturday matches with efficiency.

Top-seed David Fink advanced to the final of the 3-Wall small ball in the upper bracket, while the NYAC’s Joe Kaplan staged a comeback from 4-12 in game two of the semifinals against Carlos Vazquez and outlasted 3-Wall big ball finalist Brian Medina in game one of the semifinals in the longest game to 15 ever played at the 3WB (23-21). “Brian was completely spent after that first game and has nothing left for game two,” stated Kaplan.

Timbo Gonzalez ended David Fink’s quest for the 2019 ValeU Group slam in the upper bracket semifinals, as the current 1-Wall small ball and big ball national singles champion raced to a 13-0 lead, only to be receiving serve at 20-22. Timbo played solid defense in the late stages of the match, eventually advancing.

Joe Kaplan trailed Tywan Cook throughout the first half of their bottom bracket semifinal, eventually catching Cook at 16 and playing virtually even the rest way of the way. Kaplan advanced to his second singles final of the day, defeating Cook 25-23.

Tywan Cook played spectacularly in the upper bracket, holding off the white hot James Aguilera to advance to the final, while 1-Wall #1 Timbo Gonzalez had little difficulty overcoming his frenemy Hector Velez in the bottom bracket, setting the stage for what promises to be a sensational final.

Las Vegas, NV, WPH Press, 9/27/19- The 10th edition of the 3WB Outdoor World Championships kicked off at THE STRAT on the Las Vegas Strip on Friday, as more than 800 handball, racquetball, and paddleball players launched the largest court sports party in the U.S. “We just want all of the court sports athletes to have a great time, enjoy the great weather, and really enjoy the event and the competition,” stated 3WB founder and pioneer Mike Coulter. 3WB and THE STRAT HOTEL spared no expense at the 2019 3WB, as all players were provided with STRAT buffet tickets for each day of the event, sensational room rates and swag, plus outstanding prize money.

The 3WallBall and 1WallBall big ball singles and doubles events started on Friday afternoon under the beautiful blue Las Vegas skies, as the world’s best began their quests for 3WB Outdoor World titles.

Friday’s Match of the Day 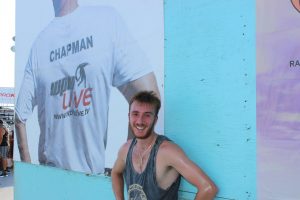 3WallBall #1 Samzon Hernandez survived a scare in Friday’s best match, dropping game one to New York Josef “Gooch” Gotsch and standing three points from elimination in game two. Hernandez rallied to even the match at one game apiece, but again found himself again on the brink of elimination in game three. With the score tied at 11, Gotsch failed to capitalize on a right-hand setup, opening the door for a patented Hernandez left-handed re kill. Another left-handed kill from Hernandez gave “The Machine” a 13-11 lead and two more unanswered points earned Hawthorne’s superhero a trip to the quarterfinals.

“I had my chances and just felt like the points I was losing were on my errors,” stated former World WallBall Champion Gotsch. “I played at 100% in game one and just couldn’t maintain that stamina in the second and third. I trained with Samzon in California a few weeks ago and he was very encouraging and that helped me a lot.” 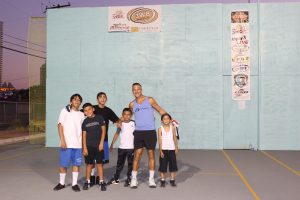 Friday night belonged to the juniors, as the 1-Wall courts opened up and nearly a dozen seasoned and new junior handball players took over the courts. WPH Development Director and Master Instructor David Fink led a group of juniors in King of the Court 1-Wall doubles, followed by a target hitting competition for a 3WB shirt. “This shirt is awesome,” exclaimed the winner of the target hitting competition.”

Fink then recruited current national small ball and big ball champion Timbo Gonzalez and 1-Wall star Josef Gotsch to play King of the Court doubles with another group of eager youngsters. “This is awesome and my boys and their friends are completely hooked,” beamed the father of one of the youngsters. “These boys are all soccer players and they really picked up the game quickly. I can’t get them off the courts now!”

The King of the Court doubles featured multiple rallies of 10+ shots, as the juniors between the ages of 8-13 relished their court time with the game’s best players.